Where has all the beach gone?

I have excuses! Qualifying exams (passed!), thesis proposal (also passed!), life (grade pending)...but none of these seem quite appropriate. I've been busy, yes, but so have most people. And I realized today, at the end of the semester, that I've actually been doing research worth sharing.

It's time to finally tell you what I do for a living (if, indeed, grad students are allowed this "living" thing).

I study coastal processes, specifically how waves and currents influence sediment transport. To get a sense of what that means, I give you the following illustration: 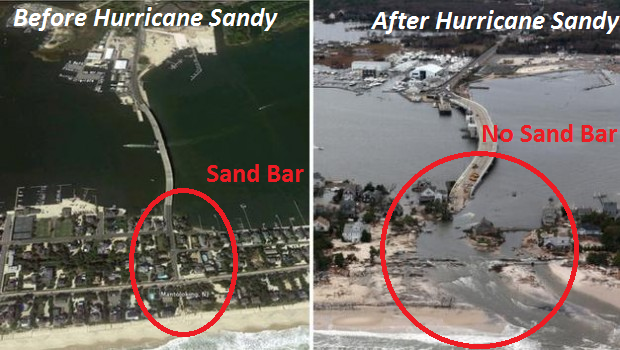 Hurricane Sandy occurred in Fall 2012. It hit the eastern coast of the United States with surprising force, severely damaging the shorelines, beaches, and accompanying properties of many states. The picture above shows one instance of damage along the New Jersey coastline, in which a large chunk of sand was removed by the storm, along with it any house unfortunate enough to be built there.

How did one storm move that much sand? Where did all of that sand go, and is it ever coming back? My research works to answer, in a slightly tangential manner, both of these questions.


Hurricanes are to be reckoned with -- mainly because they enhance natural forces already present in a given water environment. With a hurricane comes bigger waves, stronger winds, faster currents, storm surge (think a wall of water piling up on the coast)...when they combine in just the right way, as they did in Sandy, they can generate enough energy to loosen and transport a whole lot of sand away from its bed.

Currents and waves move sediment on their own, also, typically over longer time scales than a couple of days (more like decades, or even centuries). They've been slowly changing the shape of our coastlines for all of human memory, and yet exactly how they do this remains a mystery. The science behind sediment transport in general, actually, is still a problem society needs to grapple with. We know waves and currents move sand, but we don't know enough to be able to predict their effect.

That is where I come in.

My lab works to monitor the flow conditions (waves, currents) in the surf zone. If you've ever been to a beach, you know what the surf zone looks like -- it's the place closest to the dry part of the beach where all of the waves are breaking. If you've ever had a wave crash on you, you know that breaking waves carry a lot of energy (that stuff can hurt!). That energy gets transferred to the mean flow in the surf zone, which in turn can do all sorts of delightful things like move sand (which is why water in the surf is often brown-colored), generate alongshore currents, stir the water, and basically make a mess of things.

This "mess" is one of the reasons the surf is an exciting place to work. Unfortunately, I am not quite that shallow yet in my research. See, I take my lab's data and use it to validate numerical models which help me study the forcings behind sediment transport, both in the surf and in slightly deeper water. The surf is such a complicated area that I cannot be confident yet in my model's ability to capture it.

Instead, I'm looking at about 2-7 m water depth for my current research. My "lab's data" is also a poor choice of words to describe how I figure out how things should behave in the real world. This "lab" is actually more my lab group, which includes a wonderful field crew of divers, technicians, and grad students. The "data" is actually more measurements that we make using a number of different instruments, usually stuck to the bottom of the surf zone and left to ping in the water for a couple of months.
The field site I am interested in at the moment is located in Martha's Vineyard, MA (not a bad place to get to during the summer, I have to admit). Though my lab group could have chosen numerous environments to study waves-currents-sediment transport, such as the places in New Jersey devastated by Sandy, we picked this particular site because of one particular interesting feature:


The body of water on the eastern side of the island (right in the picture above) connects the Vineyard Sound in the north (top) to the Atlantic Ocean in the south (bottom). Most of the time. Most of the time. As you can see from the series of images outlined in black, the connection between the Bay and the Ocean is not always present. Nor is it always the same size, or even in the same position.

In fact, this transient inlet is what makes the Martha's Vineyard site so interesting to study. The inlet breaches every couple of decades or so when a large storm system comes through (hello hurricanes!). The breach then spends the next 10-15 years migrating to the east, closing again once it reaches the eastern bank of Katama Bay.

This migration cycle is ideal for sediment transport study in part because it occurs on relatively short time scales, and in part because it is such a strong transport signal that you can begin to quantify it from Google Earth images alone. One of the largest barriers in sediment transport field research is obtaining accurate measurements with sufficient spacial and temporal resolution to actually say something useful about how sand is moving. It is my hope that by looking at a relatively obvious signal, and combining some remote observations/some gritty in-the-field measurements of whatever we can get our hands on with a numerical model, I can use this field site to understand large scale sediment transport better.

How do we get these field measurements? Why can't the model just do everything alone? How feasible is this project, really?

When a hurricane next hits the East Coast, how is the shoreline going to change? Where is the sand going, and where is it coming from?

All this and more as I (hopefully) continue with more frequent updates.
Posted by HychenJ at 4:54 AM

HychenJ
An engineer masquerading as a fluid physicist. Or maybe it's the other way around.