I am working on two things at the moment. One is a coastal wave model that often makes me feel like a blind astronomer. When it works, it is wonderful, but when it doesn't I spend weeks poking around trying to figure out why it is hiccupping. Akin to sticking your hand in a black box of spagetti, trying to ferret out the one strand of angel hair pasta.

The other is something I do in my spare time, when it exists. It has absolutely nothing to do with waves and fluid mechanics, so I don't think it will be featured in this blog just yet. I need to be more comfortable with my progress on it, anyway.

However, seeing as it is pasta-black-box time in my research once again, I think I will take this opportunity to write about something else completely unrelated to coastal research--a finished project I constructed in my senior year.

It was one of those school projects which could have been made to meet spec with some 2x4's and a couple of screws, easy. But my senior design class was all about making things harder for no good reason.

Because learning to weld. And making crazy mechanisms to avoid as many calculations as possible.

In short, because fun. 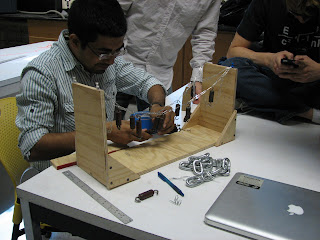 Basically, the original idea was to hang the chain and weld it into place, capturing a natural and perfect arch shape. 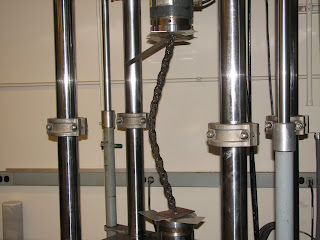 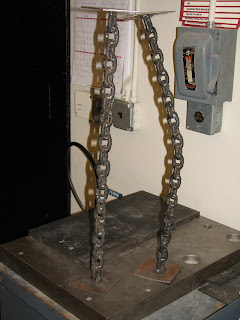 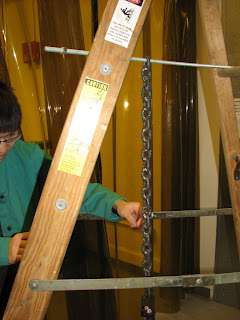 Turns out hanging over ten feet of chain in the lab and leaving it until we felt like welding was not going to be an option. So we decided to weld individual segments straight and then piece them together.

Our janky weld set-up. But, hey, behind the appropriate screen! 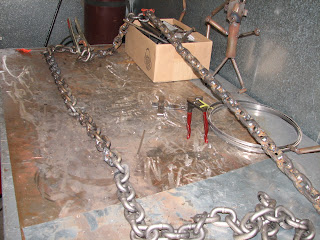 Partly welded chain, partly not. We left one link free for each straight segment, so we could... 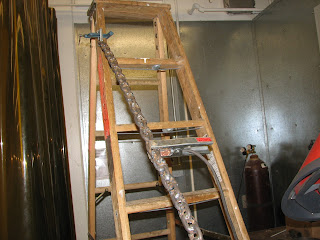 Hang the chain length between a ladder and a doorframe and weld each joint together? Not planned at the last minute. Nope. 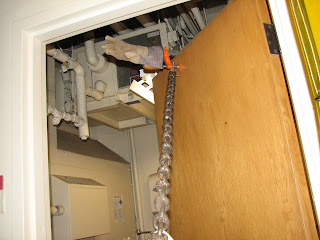 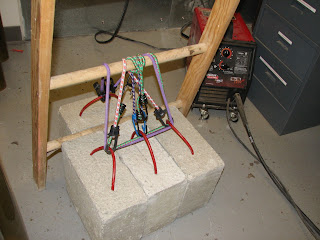 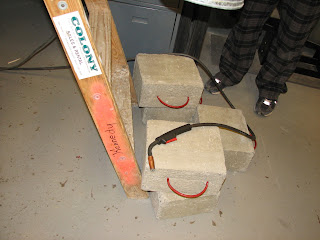 This actually was not overkill. By a long shot. 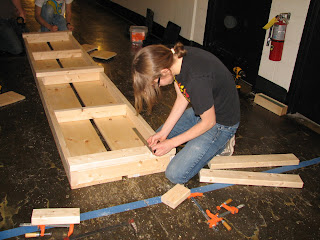 At some point we had to deal with the deck. Unlike the chain arch, this took all of two hours. I am really comfortable working with wood thanks to non-academic projects in undergrad. 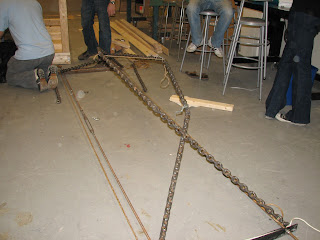 The two completed arches! Now to put everything together... 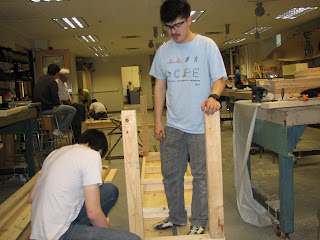 We needed to support the endload somehow. So we were lazy -- well, mainly pressed for time -- an basically tacked on some 4x4's on the ends 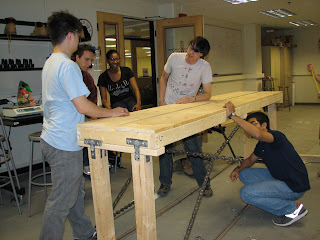 Which made the arch structure completely useless. See? I said at the beginning that the design specs could be met with nothing more than some wood and screws.

Having proved that to ourselves, we decided we might as well be all in or nothing. So we went back to weld eight more compressive elements for the ends of the bridge and to brace the joints of each arch.It meant several more hours in lab, and lots of time readjusting the design and angles of every new element, but it was worth it. 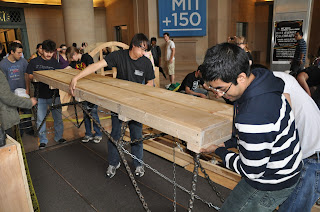 Testing day. We definitely had the easiest set-up. Just planted the thing on the ground. 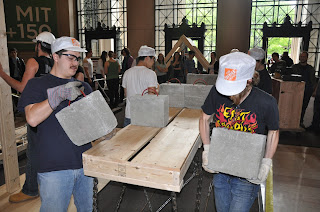 Loading the bridge with concrete blocks. The goal was 2000 lbs without failure. 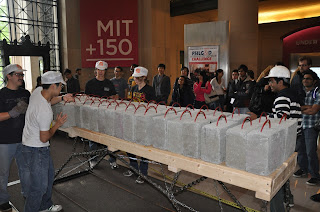 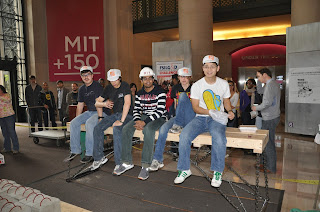 Also, as it turns out, holds five point loads quite nicely.

I think the bridge is currently the desk of some civil engineering professor. Rather fitting.

The bridge testing day was by far one of the best days my senior year. Building something is an accomplishment. I realized that day that all of the hard work, backtracking, and flexibility needed to complete a project well was worth the trouble. You cannot schedule everything ahead of time, for certain (as much as I would like to pretend otherwise).

Also, I realize that mechanical engineering majors must have all of the fun all of the time, if they get to build things their entire undergraduate career. I take small satisfaction in the thought that they will not be building bridges, though--and certainly not ones that have no business existing.
Posted by HychenJ at 4:58 PM

HychenJ
An engineer masquerading as a fluid physicist. Or maybe it's the other way around.